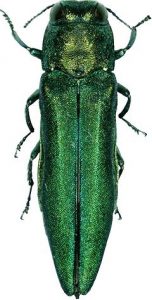 In North America the borer is an invasive species, highly destructive to ash trees in its introduced range. The damage of this insect rivals that of Chestnut blight and Dutch Elm Disease. To put its damage in perspective the number of chestnuts killed by the Chestnut Blight was around 3.5 billion chestnut trees while there are 3.5 billion ash trees in Ohio alone. Dutch Elm Disease killed only a mere 200 million elm trees while EAB threatens 7.5 billion ash trees in the United States. The insect threatens the entire North American Fraxinus genus, while past invasive tree pests have only threatened a single species within a genus. Since its accidental introduction into the United States and Canada in the 1990s, and its subsequent detection in 2002, it has spread to 14 states and adjacent parts of Canada. It has killed at least 50 – 100 million ash trees so far and threatens to kill most of the ash trees throughout North America. The green ash and the black ash trees are preferred. White ash is also killed rapidly, but usually only after green and black ash trees are eliminated. Blue ash displays some resistance to the emerald ash borer by forming callous tissue around EAB galleries; however, they are usually killed eventually as well.

We have a certified arborist on staff at all times to help you with any question or concerns you may have!

We Specialize in All Your Landscaping Needs

Aarons Tree and Landscaping offers 24 Hour Emergency Storm Service and we are fully insured for your protection!